Humans work to live, study to live better, and watch their diet to live longer. Humans always think of a way to have a better life and food to be able to survive in their everyday life. Even without the evolution of technologies human can survive. Humans recognized as the only and first to made and use a tool to survive. That was before because scientists found out that chimpanzees and other animals like birds are also making and using tools. Chimpanzee facts states that chimpanzee are closely related to human and what they do to survive and behavior are also mostly the same.

Except for humans, chimpanzees use lot of tools for many purposes than other creatures. Just like human, chimpanzees have also their own way of living. Human live in a house made in wood, cement or gravel constructed in a city or province but the chimpanzees shelter is made in woods or stones in the forest and wet savannahs. Being in a forest can give them more safety. Wild chimpanzees can live almost 50 years and almost 10 more years for the captive chimps. 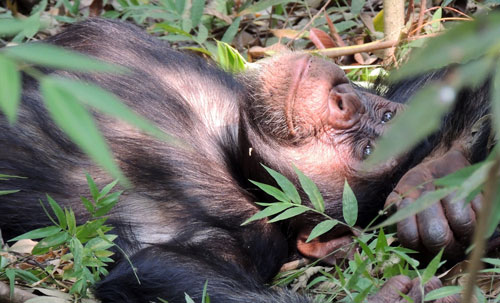 Chimpanzees eat nuts, blossoms, seeds, leaves and insects to live. Other chimpanzee facts states that they also hunt small mammals to eat such as monkeys or bushbucks. Unlike orang-utans and gorillas that has narrower diet; chimpanzees tend to live in a variety of habitats because they have a variety of tastes. Chimpanzee facts also say that when a chimpanzee mother dies, orphaned offspring are often adopted by their older brother and sisters while the infants are being adopted by chimpanzees that don’t have relation to them.

Chimpanzee’s intelligence has been proven through series of studies by experts. Chimpanzees are known to be the highly expressive and intelligent animals and they have the chance to live longer together with human because they can learn human languages like American Sign Language or (ASL) and some concepts of numerical sequence. They also come up with many hunting strategies that require cooperation. Chimpanzees communicate like humans. It is through hand gestures, nonverbal communications, facial expressions and vocalizations.

The use of branches and large sticks are the main weapons of chimpanzees to fight their enemies. They throw it to their enemies like humans and leopards. Chimpanzees are threatened to get extinct because some people are hunting them for commercial purposes and they also ruin their natural habitat in Africa. They might get extinct in the next few years because of the various human activities ruining their environment.

As have been said a while ago, chimpanzees are like humans. There are may be different but they have also some similarities that make them related to each other. Knowing and understanding such differences lead to harmonious relationship. Zoo and wildlife are not the animal’s real shelter. They only brought there because they became endangered due to the threat in their natural habitat. Animals especially chimpanzees also need to be treated with respect and have the right to live in this world freely.