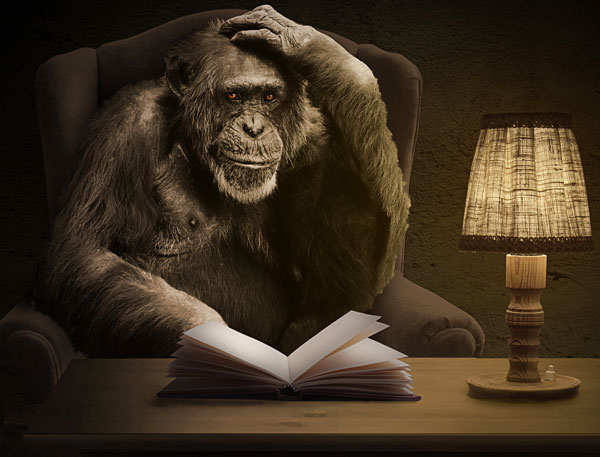 As monkeys resemble human beings, chimpanzees resemble human-beings. Chimps are one of the species of great apes. There is a difference between great apes and monkeys. Chimpanzees are larger in size and they can walk for a long period of time and they can stand upright. The brain functionality of chimpanzee is great and there will not be any tails.

Chimpanzees live in the wildness and it is estimated that the population is in between 100,000 and 300,000. The chimps’ population is decreased at a great pace. You can find them in African countries. Most of the population is found in tropical rainforests. They are also found in woodlands, bamboo forests and swamps.

The interesting fact about chimps is that they live in communities. In a community, there will be about 50 animals and there will be family groups of 3 to 6 individuals. The highest male will lead the community. Adult males follow the hierarchy. The alpha male is the powerful and leading member of the group. The popularity of the alpha male is based on the support offered by females. However, the hierarchies are not fixed and they can change at any point in time as per their convenience.

Even though adult females can move in between communities, the territory of communities will be patrolled without any compromise. There are some chimp communities where you can find more than 120 in one community. There are multi-male as well as multi-female communities.

Even though all community members know each other, they will move in groups of 6 or less to get food and manage sleep. Chimpanzees will have social life. Half of the community will join together during community gatherings and they will share food, play and groom.

Chimps are facing habitat destruction. Hunting and commercial activity can be blamed for this issue. Some chimps will die due to disease. The human population is encroaching the protective habitat of chimps. There is great demand for bush meat which comprises of chimpanzee as well. If there is increased contact with humans, there will be mild disease threat in humans. However, chimps will experience lethal disease threat.

It is interesting to note that we share DNA with chimps to the extent of 98%.

The females are allowed to mate with multiple males. Males will treat all the offspring as their own. When a female reaches the fertile state, there will be pink bottom. Males will identify the same and they will mate with female. By the age of 14, the female chimp will manage a child. As it takes 9 months for human beings, it will take 8.5 months of gestation for chimps. The infant will stay with the mother for about 5 years. After attaining 6 years, the infant will become independent. However, the infant will be dependent upon the mother up to adulthood. The female chimp will be fertile after the weaning of the child. In this process, a female will manage about 4 to 6 children in its lifetime.

During the session, there will be firm bonding among the chimps. In this process, they will also clean with the help of the other. During the grooming process, the dirt and dead skin will be removed. There will be elimination of parasites as well. It is one of the most favorite social activities of chimps. If there are any disagreements between chimps, they will be patched up during grooming sessions. Chimps will take rest and they will build new friendship through grooming operations. Through grooming sessions, chimps will manage what they need.

Some mothers with young children will choose newcomers so they will maintain close relation. If a chimp would like to be groomed by another chimp, they will convey the message by smacking their lips. They will chalk their teeth quietly and move close towards the chimp so that they will convey their desire to be groomed by the other chimp. Grooming is a nice exercise which is enjoyed by chimps and they would like to groom others as well.

There are different kinds of body postures, facial expressions, gestures and vocalizations through which chimpanzees will convey their message other others in the community. There will be one to one language as well as one to many gestures. Through loud calls, chimps can convey message for a long distance. If they drum the buttress of a tree, a message will be communicated. Through panting, they will say hello to another chimp. Grunting and flicking is meant to convey disagreement. There will be tickling and laugh during play. If a chimp is very nervous, you can find the hair stand on its ends. There will be screaming when the chimp is very much upset. Thus, chimps will convey their feelings in a very efficient manner and you can notice the joy or excitement very easily. They will use various facial expressions to convey their emotions.

Chimps will use various kinds of tools with stones. By using a stone, they will crack nuts. They will explore insects or honey. Spears are used to hunting small animals. If they go through places where water cannot be accessed very easily, wads of leaves will be used so that they will get water by squeezing the wad.