The chimpanzees belong to the class of mammals and the order of primates which includes the apes, monkeys as well as humans. They are being described as clever and noisy creatures with large brains. Chimpanzees are considered as the most intelligent of all the animals. They are being identified as great apes and the closest animal to humans with a 98% similarity in DNA.

The Chimpanzees can be easily distinguished from the other family of great apes and monkeys because of their physical features. There are some significant chimpanzee facts with regards to their physical appearance. Like humans, their faces are flat, noses are small and with eyes that are facing forward. The facial features of chimpanzees have implication to their senses. Their reliance to vision is increased and they also have color and bifocal vision while their reliance to smell decreased. Their senses are very similar to humans including sense of sight, hearing, taste, touch and smell. Chimpanzees can also create different facial expressions which are distinct chimpanzee facts. 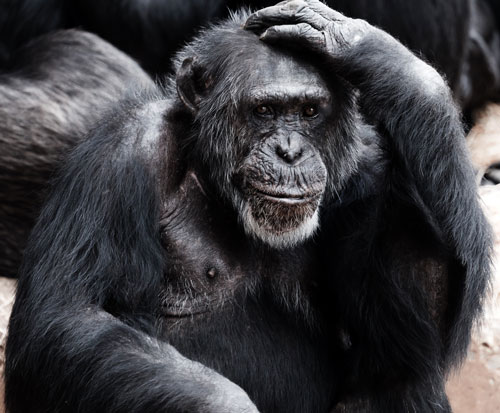 Instead of having fur, the body of the chimpanzee is mostly covered with long black hair and sometimes they can also have mustaches on their chin. Their whole body is hairy except their ears, faces, palms of the hand as well as the soles of the feet which are bare skin. The color of the bare skin varies; it can either be black or pink. Their arms are longer than their legs and they have a short body. Chimps also have an opposable big toes and thumbs which mean that their thumbs are shorter than their fingers. All their 4 limbs are flexible and these features determine how the chimpanzees move around. The infant chimpanzees have a skin that is very pale and tail tuft that is white. However, these physical features disappear when they finally reach early adulthood. One of the chimpanzee facts is that they do not have tails and several mature female chimps become bald.

Other chimpanzee facts generally includes that the male chimpanzees are slightly heavier and larger than females. The East African adult males in standing position have a measurement of 3-4 feet tall and can weigh between 90-115 pounds or 35-70 kg. On the other hand, female chimpanzees can stand at around 2-3.5 feet tall and weigh between 57 to 110 pounds or 26 to 50 kg. The baby chimpanzees at birth have an average weight of 2-4 pounds or 0.90-1.81 kg. The chimps that are found in West Africa or the ones in captivity can be even bigger.

The lifespan of chimpanzee in the wild is between 40 up to 50 years and in captivity they can live longer for about 60 years and above. 100 years ago, there were about 500 million chimpanzees living in the continent of Africa. But their numbers decreased because of human activities such as deforestation especially in Central and Western Africa. Today, the chimpanzees are considered as endangered species and the numbers left in the whole world is only about 80, 000 to 130, 000.