How Do Chimpanzees Behave

Before, we only knew little information about the behavior of chimpanzees in the wild until 1960 when Dr. Jane Goodall went to Gombe Stream Reserve located in Tanzania, East Africa. She studied different chimpanzee facts for 45 years by interacting with the wild chimpanzees in Tanzania. She is very well-known and she was considered as the most expert in chimpanzees all over the world.

Dr. Goodall observed that the culture of chimpanzees is just like the culture of humans. Their culture varies from the kind of environment where they live. The chimps show more than 39 behaviors including feeding, grooming, and tool use as well mating. 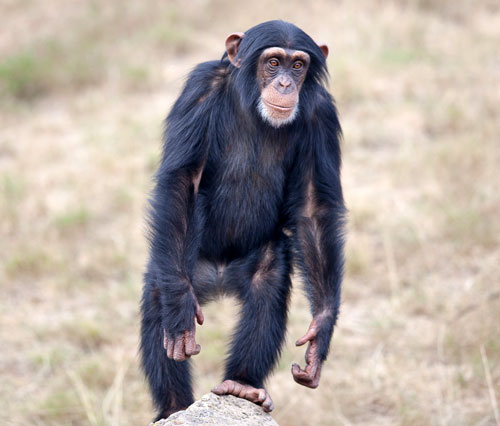 One of the amazing chimpanzee facts is their ability to use communication skills. According to the researchers, there are over 30 calls that have been identified and these calls are heard as far as 2 miles. Chimpanzee food calls are combination of barks, pant hoots and grunts to tell the other chimpanzees about the location of food. If these kinds of calls are intensified, it means there was a successful hunt that took place. When they sense something dangerous or unusual, they will make a ‘WRAA’ call that is long and loud. Young chimpanzees also produce a breathy laughter when they are playing. The resting chimpanzees also emit soft grunts to sustain the communication between them. Every chimpanzee has their own distinct pant hoot so that they can be precisely identified by other chimps.

Other chimpanzee facts includes that they are living in groups called unit groups or communities. The community size varies from area to area and it can be smaller or larger. Their social structure can be classified as fusion-fission. This means that chimps wander around in subgroups approximately composed of 10 members. However, it always changes because some chimps travel alone or join with other sub-groups. There are times when different members of a community come together for a gathering. This happens usually when there is a female chimp that is oestrus or there is an available food source on that certain area.

The bonds within the family of chimpanzee are very strong especially the bond between the mother and her offspring. The offspring are very dependent on their mothers up to 7 years old and they are always seen together. Some chimps have a travelling companion such as their siblings or friends. Even if the groups are scattered, they can still maintain contact using pant hoot.

Other chimpanzee facts discovered by Dr. Jane are the ability of the chimps to use different tools just like humans. They use objects such as branches, stems, twigs, rock and leaves in order to do different activities such as drinking, feeding, weapons and cleaning themselves. The use of tools are acquired and learned through observation and the knowledge is passed to younger generations.

The average hours spent by chimpanzees to look foods are about 6-8 hours. Their diet includes different varieties of seeds, leaves, plants and fruits. The main components of their diets are fruits and vegetables while bird eggs, insects and meat of small to medium-sized animals are just additional food sources.