A Chimp or Chimpanzee is one of the 4 types of world’s great apes including bonobos, orang-utans, and gorillas. Chimpanzees are commonly found inhabiting in the rainforests, grasslands, and woodlands of Central and West Africa. Its face has a pink shade to black shade in color and the entirety of its body is concealed with long dark black hair, except for its face, ears, its fingers as well as its toes. 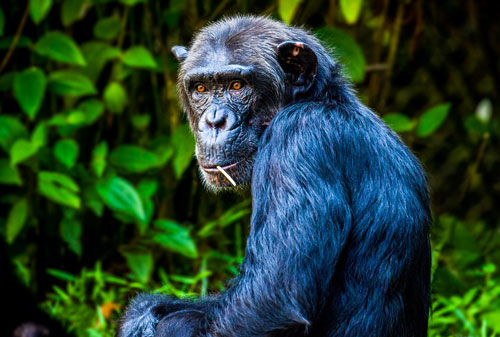 You may mistakenly distinguish a chimpanzee from monkey but one major difference that separates chimps from monkeys is its tail. When making a distinction between a monkey and a chimpanzee, you have to know that Chimpanzees do not have tails while monkeys do. Chimpanzee also has opposable thumbs as well as toes which helps it to grasp any object so easily. When it comes to diet, chimpanzees are omnivorous by nature and mainly consisting of plants, fruits, eggs, meat, and insects.

Here are some more interesting chimpanzee facts and amazing pieces of information that you need to know:

Chimpanzees possess a lot of similarities when it comes to intelligence and attitude. Another additional fact, they groom and hold hands with their partners a lot and just like humans, they do touch each other more often and even kiss the first time that they meet. Truly, Chimpanzees are amazing and interesting.