Pan Troglodytes Troglodytes (Central Chimpanzee), subspecies of common chimpanzees is the human’s closest living connection just like the bonobos, the western chimpanzee, eastern chimpanzee and the Nigeria-Cameroon chimpanzee. You can find this type of chimpanzee in areas such as Republic of the Congo, Cameroon, Gabon and other regions in lesser extent.

The etymology of this species comes from the Greek god Pan who according to mythology is the one who oversees the wooden glens, groves and fields, for Pan. Troglodytes are the Greek term for cave-dweller. The one who has coined this scientific name for the central chimpanzee was Johann Friedrich Blumenbach in the book Handbook of Natural History which was published back in 1779.

Aside from the above-mentioned area, you can also find central chimpanzees in the Equatorial Guinea, Angola’s Cabinda enclave, south-eastern region of Nigeria, the Democratic Republic of the Congo’s coastal extension and in the Central African Republic. The range of habitat and distribution of these primates are extended to the northern part of Sanaga River in Cameroon, to Ubangi River’s east which is the border of the two republics of Congo and to the south of the Congo River. 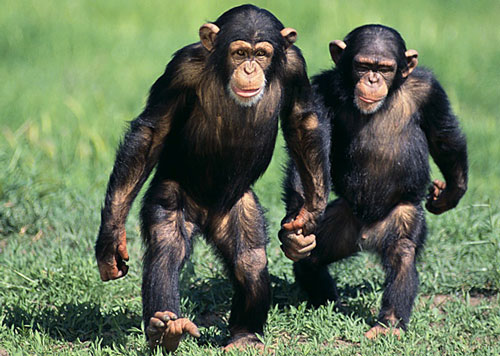 Back in 2007, the Pan Troglodytes Troglodytes (Central Chimpanzee) is classified as an endangered species at the Red List of Threated Species of the International Union for Conservation of Nature (IUCN). Twenty years ago this primate is considered as a vulnerable species but has been considered as endangered since 1996. There are only about 115,000 central chimpanzees that are alive according to the World Wildlife Fund (WWF), what but is that it is only an estimated number and may believe that their number is between 40,000 and 80,000. The large and robust populations of Pan Troglodytes Troglodytes (Central Chimpanzee) are found in those left undisturbed forests, some isolated and small populations also remains. It is expected the population of the remaining central chimpanzees will further decline in the next 40 years according to IUCN.

The decline in their population is due to several factors which include poaching, habitat destruction and Ebola hemorrhagic fever. All of these causes of decline are attributed to the increasing presence of human in their populated areas (development, de-forestation, agriculture) as well as political instability.

A lot virus that affects humans also affects chimpanzees due to the close relationship of their gene to humans, being the closest living relatives. Some of the diseases that these primates are vulnerable to include common cold, pneumonia, influenza, whooping cough, measles, tuberculosis, yellow fever and Human Immunodeficiency Virus (HIV). They can also contract diseases which are caused by parasites such as salmonellosis, giardiasis, schistosomiasis and filariasis. Due to this genetic characteristic, the Pan Troglodytes Troglodytes (Central Chimpanzee) are also affected by the diseases which commonly affect human beings.