Just like other chimpanzees, eastern chimps are subspecies of those commonly found in the forest. You can find Pan Troglodytes Schweinfurthii (Eastern Chimpanzee) in the regions of Tanzania, Rwanda, Burundi, Democratic Republic of the Congo, Uganda, Sudan and the Central African Republic. These places are once inhabited by this primate, but were gradually reduced due to the interference of human activities in recent years.

Adult chimps can weigh up to 65 kilograms in the wild. Males can grow up to 63 inches while females at 51 inches in length. Chimpanzees are stronger compared to humans even though they are lightweight as the construction of their muscles are far more effective compared to human beings. They are actually six times stronger. The entire body of chimpanzees is full of hair which is dark brown color but not their fingers, face, palms of their hands, soles of their feet and toes. The opposing characteristic of their thumbs on their toes allows them to grip the branches of the trees precisely.

Pan Troglodytes Schweinfurthii (Eastern Chimpanzee) spends most of their time on the ground and trees where they build nests in order to sleep. They live in a community just like humans that ranges from 20 up to 150 members, but they mostly travel in small groups of few individuals. They use the soles of their feet as they walk and utilize their knuckles to rest. They can also walk uprightly but for a short distance only. When being bothered by predators, Pan Troglodytes Schweinfurthii (Eastern Chimpanzee) screams aloud and uses any object that they can find to defend themselves. This protective reaction is common to them just like humans when threatened. 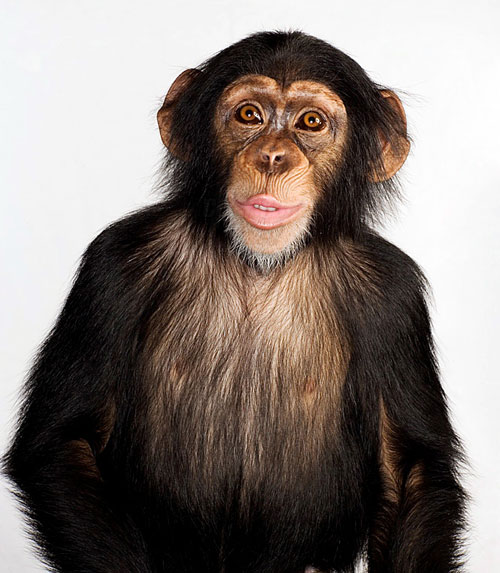 Eastern chimpanzees, just like the common chimps and humans are omnivores which means that they eat both meat and plants. Their diet includes seeds, leaves, fruits, bark, small preys and insects like termites and ants. They use tools such as twigs ad sticks in order to reach for these insects as well as hunting for small animals. Sometimes they also work as a group while hunting, for example, killing cubs of leopards. This act of is an effort to protect themselves from their natural predator which is the leopard.

But just like the other relatives of this primate, they also face extinction as they are listed as an endangered species in the 2007 Red List of Threated Species of the International Union for Conservation of Nature (IUCN). It is a known fact that common chimps are widespread and abundant of those great apes (non-humans), the recent decrease in their numbers in East Africa is anticipated and will continue for the coming years due to the loss of their habitat and poaching for their meat.

Due to the genetic and physiological similarities of chimpanzees to human beings, they also succumb to a lot of diseases that plague humans. It is also important that tourism and research should be properly managed as they present some risk of transmission of disease between chimpanzees and human beings. Doctor Jane Goodall is the world-renowned scientist who extensively studied this subspecies.