What do chimpanzees eat?

Compared to other mammals, chimpanzees have a large brain. They are large in size and very big as well. Chimps should have access to various kinds of food items so that the nutrition part is addressed in a very efficient way. As chimps are omnivores, they will eat a variety of food from plant sources as well as animal sources. As they can eat various kinds of food items, they will be able to survive in difficult situations as well. Even though there is a shortage of plant source of food, they will survive without any issues. However, they prefer a vegetable source of food.

The preference exercised by chimp varies from one individual to another individual. All through the day, chimp will be found eating food. Chimp will spend about 6 to 8 hours on eating. They will eat all kinds of food items in the morning. However, they will become selective after few hours. They eat leaves which have more water so that their digestion requirements will be fulfilled. Chimps show lot of intelligence in drinking water. By using chewed-up leaves, they will be able to sop up water. The meat consumption of a common chimp is higher than bonobo.

Common chimpanzees have enough food on the tree. By stretching their hand or moving a little on the tree, they will manage sufficient food. Fruits are their favorite food item. However, they will also eat leaves, bark, seeds, flowers and resin. As some fruits and nuts are hard, they will use stones as tools to break open them. By using curved leaves, they fetch water. 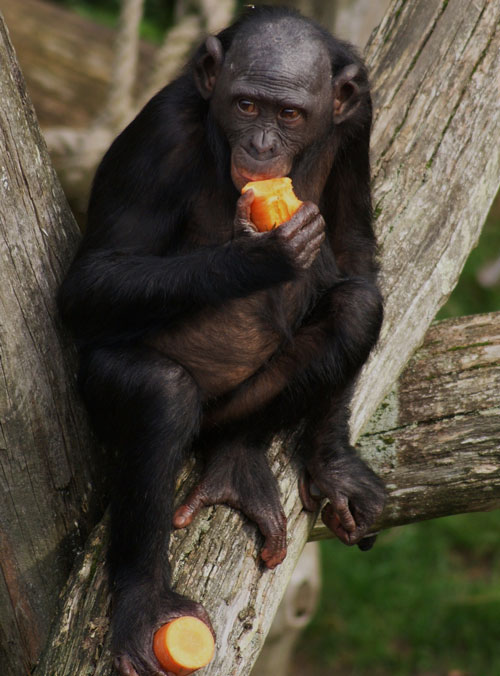 There will be sufficient quantity of protein through the vegetables that are consumed by chimps. The meat consumption is less. Most of the protein is generated through the consumption of insects. The consumption of meat in males is higher than females. By using a stick or twig, chimps will manage termite nest without any issues. Very rarely chimps will go for hunting as well. They have the capacity to hunt small vertebrates. Sometimes, they will eat boars, birds and their eggs as well. They will hunt for red tailed monkeys, yellow baboon and blue duiker.

After inserting the stick into the nest, the chimp will eat the most recently caught food. They eat caterpillars as well. Hunting for food will be taken up as a group activity. They can catch a small monkey very easily by going through the trees. However, complicated task will be accomplished as a team. Each participating chimp will perform the task in an efficient manner so that the hunting will be completed successfully. Some chimps will chase the prey. There are some chimps that will hide and wait for an opportunity to catch the prey.

The members of the team will share the food when the animal is dead. In some cases, chimps can kill and eat members of their own community.

If the availability of fruits is less, chimps will go for seeds, bark and flowers. As per studies, it was observed that chimps can eat up to 80 plant species. Wild chimpanzees get food from buds, leaves and blossoms as well.

The food supplementation will be done by a variety of food items including insects. 4% of their food constitutes insects. They enjoy termites very much as they are nutritious. To suck termites from mounds, chimps use straws. By using bamboo rods, chimps will be able to scoop termites in a very efficient manner.

Meat is the rarely taken food by chimps. However, when they take meat, they will eat brain as well. They will eat meat which was hunted in the wild. A large part of the day will be spent in search of food. They will hunt monkeys and other small animals as well. They are aware of the food source and will target certain locations as per the season. They are aware of the difference between ripe and unripe fruit. It was noticed that chimps will eat certain medicinal plants as well so that t they will get soothing effect. The intestinal parasites will be eliminated with the intake of medicinal plants. 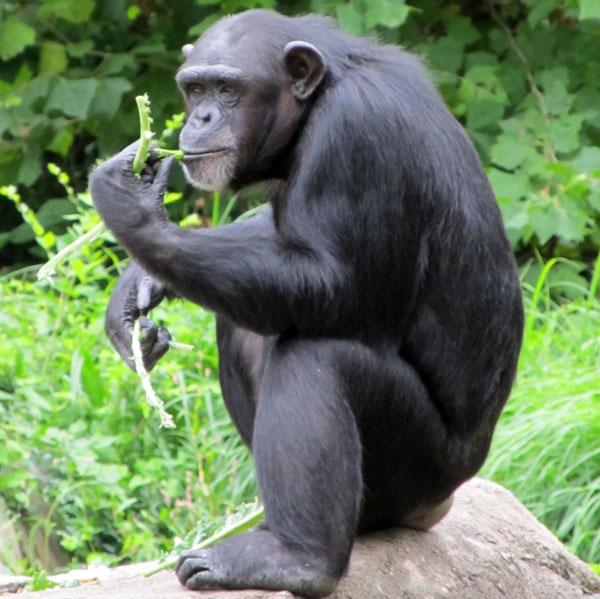 Chimps use their brain to create different kinds of tools so that they explore for food in a very efficient way. They can strip a stem of leaves and the stem will be used to catch termites. They will also use tools in a variety of situations. They will use rocks as hammers. By using rocks as tools, they will be able to smash nuts and seeds very efficiently. They use leaves as napkins and sponges. By using a stick, they will be able to probe honey.

They will prepare spears and small animals will be killed in an effortless manner. They will maintain a toolkit so that tools are used in sequence and the food will be collected in a very efficient manner. It will take about 5 to 6 years to get proficiency in catching termites and sourcing food from difficult places. As per the archaeological discovery, chimps used various kinds of tools 4000 years ago and they appear similar to the tools used at the moment.

Variation as per the community

There will be little variation in the type of food, quantity of food and source of food from one community to another community. They will be accustomed to food items that are available in the local habitat. The usage of tools will be passed on from one generation to another generation. They will also communicate in a very efficient way so that they will get protection from their enemies. They will form a group and go for hunting to fetch wild meat. When they collect food as a team, they will share the food among themselves.