Using the scientific classification, the chimpanzees are like humans that came from the family of mammals and from the order of primates. They are curious and noisy by nature. They are also very sociable and intelligent animal that never fails to fascinate the humans either in the wild or in the zoo.

The chimpanzees are classified as the great apes including the Gorilla, Orangutan and Bonobo. They can be found numerously in the rainforests of Africa and widely distributed from Tanzania and Sudan in the Eastern part and Angola and Senegal in the Western part. Chimpanzee facts states that the largest population of chimpanzees are found in the Democratic Republic of Congo although in some areas they are already extinct.

One of the important chimpanzee facts is their physical characteristics. Their body is bulky with long arms but their legs are short and they have no tail. Most part of their body is covered with black hair except the face, ears, toes and fingers which are all bare. Their hands can firmly grip that permits them to hold and pick up things. Their height can reach 3 to 5 feet and can weigh from 120 pounds up to 200 pounds. Most of them are black and but when they reach 20 years old, sometimes their color change from black to gray. The life span of chimpanzees in the wild is between 40 and 50 years while in captivity is 50 up to 60 years.

Most chimpanzees live in tropical rainforests and wet grasslands or savannahs. They equally spend their time on trees and land but they stay more in trees when sleeping or eating. 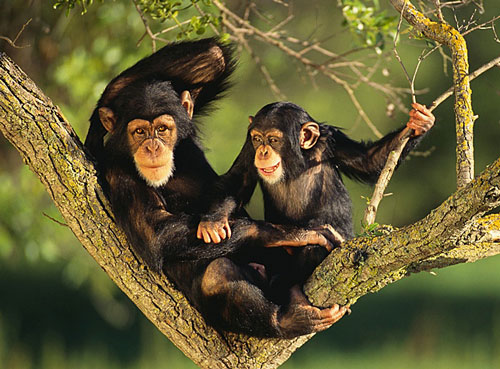 Of all the apes, chimpanzees are the most sociable. They live in communities called troops and numbers can vary from 15-120. The troop is made up of either all females or all males and sometimes mixed in a group. Sometimes, the troops also split into subgroups and is being led by a male. Males rarely leave the community where they grew up while adolescent females usually migrate to other community.

Their discovery to use tools is one of the amazing chimpanzee facts. They can pick nuts that stuck from the tree roots and they can open shells using a stone. By using twigs or grass stems as their tool, they poke the ant or termite nests and eat the insects that stick to it. In order to make a sponge, they chew the leaves, deep into the water and let it absorb all the moisture. They also use large branches and sticks against their enemy such as humans and leopards.

They can both live in land and trees but they spend most of their time in the ground during daytime. Chimpanzee facts includes that they are quadrupedal, meaning they use their 2 arms and 2 legs when walking and fingers are half flexed in order to support the knuckles weight. When walking in short distances, sometimes they also walk erect.

Chimpanzee facts also include their ability construct their nest at the top of the trees and sleep during night time. They can rapidly make a nest just by using tree branches. They bend the branches and intertwine them in order to create a platform and to finish it up; twigs are used to line the edges.

Chimpanzee facts state that they are generally diurnal or very active during daytime. Their main diet is fruits but also includes buds, blossoms and leaves. Usually they pick fruits using their hands but they use their lips when eating seeds or berries directly from the stem. Their diet is comprised of 80 different kinds of plants and fruits with some amounts of insects, birds as well as small mammals. Aside from plants, they also eat meat in addition to their diet and their common victims are young goats and antelopes as well as young monkeys or baboons. Usually, male chimpanzees hunt for meat with the help of fellow chimpanzees.

Caring for the Offspring

Female chimpanzees in estrus or in-heat have a noticeable pink swelling skin on their bottom and that means they can now mate to different males. They give birth to one offspring every four to five years with eight to nine months gestational period. The mother-offspring dependency period is quite long and offspring will breastfeed from their mothers up to five years. For some years, they will still stay with their mothers to take care for their younger siblings.

One of the chimpanzee facts is that they are the noisiest of all animals. Their ability to communicate with fellow chimpanzee is amazing yet complicated. A loud call that sounds like a ‘’WRAA” means there is something disturbing or unusual going on and it can be heard over a mile. They also make a “HOO-HOO-HOO” sound for hours while screaming, grunting and tapping the hollow trees using their hands.

Chimpanzees are also known as loving animals and one of the best chimpanzee facts. They usually hold hands, kiss and touch each other. They also groom on a daily basis and this is important to keep the strong bonds with fellow chimpanzee as well as in providing calm and comfort. Often times, the adult chimpanzee has a companion and spend most of their time together. The older chimpanzees are patient to younger ones that are very energetic.

The wild is the natural habitat of the chimpanzees. Wild forests are being transformed into farming site and other human activities while trees are being cut down. That is why the number of chimpanzees living in the wild is gradually decreasing and that is a chimpanzee facts. Like many other animals, they are also prone to diseases that can contribute to their declining number. In West Africa, they are being captured and used for medical research.